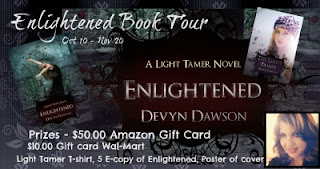 Click on the banner to see the full tour schedule :D 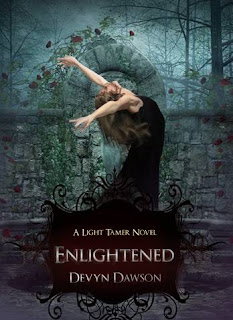 Jessie Lucente, a Light Tamer, has started her junior year at Parca Academy in New Bern, NC. She has a new boyfriend, Caleb Baldwin. He is beyond good looking, he is her mate for life. They've been bound by the light and will rule and heal with it too. Her new classes aren't what she expected. Finding out the school is filled with 'gifted' kids is almost too much to comprehend. She finds out what it really means to be a Light Tamer. Some of the assumptions she had are debunked and now everything is crystal clear...well, clear as mud. Now that she is enlightened with the facts, she struggles with the truth.

Thorne Woodson has all of the girls swooning. His Doc Martens and hoodie stand out against his school uniform. He might be the guy to heal Amber's broken, grieving heart. What's his story, and why does he appear everywhere Jessie is? He has a secret that will change the game for everyone. Who is he in cahoots with?

Amber starts her junior year with a bang and a huge crush. She has a point to prove on the first day of school. She refuses to let everyone believe she went soft over summer break. Her shenanigans end with detention on the first day. The anniversary of her brother's death has her making dumb decisions but her friends have her back. Jessie will struggle to help Amber deal with the grief.

The secrets that have been revealed by Fate will leave Jessie in a new role. It will all come down to bloodline versus logic. She must step up and embrace her new title, and life on the other side of the shimmer. With her small army together, they promise to vanquish Nyx back to the Underworld and seal the portal she came through.

The second book in The Light Tamer trilogy will answer the questions that are burning in your head. A beautiful tale of first love and friendship. Be prepared to be amazed at the twist in this story. You didn't see it coming, but you'll be glad it did!

Jessie Lucente is a Light Tamer. She found out when she moved to New Bern, North Carolina by her mate, Caleb. She is now starting her junior year of high school at Parca Academy.  As the school year goes on she realizes that a lot of kids at the school have “Gifts”.  Then enters Thorne Woodson, who seems to be everywhere Jessie is. Amber has no clue and she is smitten by hos bad boy attitude.  Jessie knows something is up and she will soon find out, but none of them could have expected what was about to happen.

Enlightened starts off with Jessie’s first day of school and right off the bat we meet Thorne. I could tell he was a bad boy by the way he presented himself and the way he acted. Also, you know that he is watching Jessie b/c he is always winking at her and shows up where she is all the time. I kinda thought he was a stalker or he was trying to get with her. I’m glad he didn’t turn out to be a stalker b/c I happen to like him. Anyways this book had me guessing till the very end. There was a surprise at the end that I did not see coming. I mean who could!!!! If you did please tell me b/c I need to do what you are doing. LOL I was also hoping for a little love triangle, but no luck. Maybe it will happen in the next one but I really really doubt it…you have to read the book. ;) We also learn more about Light Tamers, which I enjoyed and about Jessie’s bloodline (WINK WINK) LOL The ending of the book I kind of expected it, but I still screamed anyway. I said a few choice words in my head to a certain someone. Who? I’ll never tell, you have to find out for yourself. :D

Amber was still her ole crazy self, which I love. She is so spontaneous and you never know what is going to happen around her……like the one incident in the cafeteria. :D

Caleb was still the perfect boyfriend and I think him and Jessie together is great. I just think they both need to loosen up.

Jessie I thought was a little more mature. She has grown since the first book.

Thorne I thought was a great addition to the story. He spices things up a bit. I highly enjoyed him and I hope nothing bad happens to him!!!!!!!!!!

Overall, Enlightened blew The Light Tamer out of the water and I can’t wait for the next one in 2013!!!! 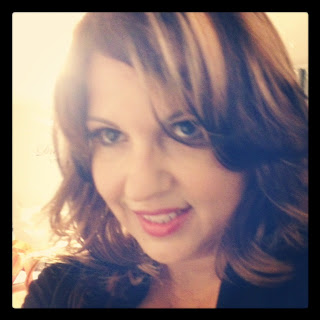 Devyn is a full time writer, wife and pet owner.  She's been writing since she was a small child.  Her first office job was working for a publisher and data entry of manuscripts.  She literally typed them and saved them on real 'floppy discs'.  When she was in high school back in the 80's, she would read Stephen King one day and Sweet Valley High the next day.  She said one day she'd find a way to merge the two books.

Currently Devyn and her husband of 19 years live in New Bern, North Carolina. Devyn is originally from Oklahoma City, Oklahoma and still refers to it as home.  She has two adult children, Paris and Hunter.  When she realized she would be facing an empty nest and family so far away, she decided to write about characters to entertain her.  Her new series The Light Tamer, is about friendship, relationships and falling in love.  The Light Tamer series is a younger young adult book, the one that takes you back to the beginning before being jaded.  It offers characters that are both good and flawed.  Throw in some mythology and you're in for a quick trip that will leave you breathless and enlightened.