The Year of the Great Seventh [Short Review] 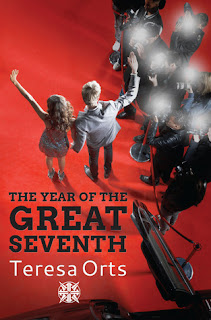 
Sophie has always felt out of step—an outsider, even amongst friends in her high school with all the hype about celebrity culture. Her life in L.A. seems to have been already written for her, but when her junior year starts, it all takes a drastic turn. When she crosses paths with the school's heartthrob, Nate Werner, they fall for each other in a way neither can understand. What they don’t know is that by giving in to their desires, they are unlocking an ancient Egyptian prophecy that threatens to return Earth to the dark ages.

To undo the curse, Nate and Sophie embark on an adventure that takes them across the country. But their quest is not only to save the world as they know it. It is also a fight for their very survival. Behind the scenes, there are those that are counting on them to fail.

Review
The Year of the Great Seventh was a great read for anyone who enjoys mythology or is just a history buff in general. Alongside the romance, the myth really added a little something to the story. I liked Sophie and Nate, although Nate could be a but much at times. The progression of their love and friendship is believable for the most part- you know- with them trying to break an ancient curse and all that. I liked Sophie's friends well enough, but they were just okay in my opinion, as well as Sophie's parents. At first the mythology was confusing for me to follow, but now that I have read the end and seen where it all comes together, it was pretty great. (:


I also love how Sophie and her father are both history buffs and that Sophie can feel her connection to Egyptian mythology. That was cute.

I get fed up when the love interest is the "cutest" boy in school and notice the girl even when she is looking a hot mess, but what-evs. Nate turned out to be okay. (: