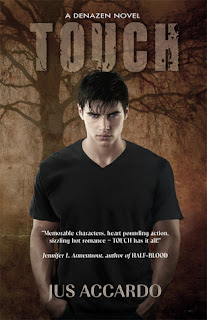 When a strange boy tumbles down a river embankment and lands at her feet, seventeen-year-old adrenaline junkie Deznee Cross snatches the opportunity to piss off her father by bringing the mysterious hottie with ice blue eyes home.

Except there’s something off with Kale. He wears her shoes in the shower, is overly fascinated with things like DVDs and vases, and acts like she’ll turn to dust if he touches her. It’s not until Dez’s father shows up, wielding a gun and knowing more about Kale than he should, that Dez realizes there’s more to this boy—and her father’s “law firm”—than she realized.

Kale has been a prisoner of Denazen Corporation—an organization devoted to collecting “special” kids known as Sixes and using them as weapons—his entire life. And, oh yeah, his touch? It kills. The two team up with a group of rogue Sixes hellbent on taking down Denazen before they’re caught and her father discovers the biggest secret of all. A secret Dez has spent her life keeping safe.

A secret Kale will kill to protect.

Review
Wow. I freaking love this book. Like.. in love with it. Tiffany told me I should read it a while back and I should have listened to her. Although.. this means I do not have to wait for the sequel like she did. muahaha.

The characters, the plot, the ROMANCE, OH MY GOD, THE ROMANCE. My heart actually pitter-pattered in a scene or two. The romance was so sweet. But at the same time, it was so... HOT. whew.
I love it.

The story, itself, was spot on. Epic bad guys? You know how much I adore those. Bad ass Paranormal abilities out the wazoo. Sold<3. Strong characters with distinct and endearing personalities. Um, this book was written specifically for me [and Tiffany. don't want to piss her off. ;) after all, she read it first!] It felt like it was a little confined to a block of town, though. I wonder how they avoided being caught in some of those situations, but I forgive. I did have a problem with one element in the story, but I believe that was mainly due to sleep deprivations and the last 3 books I have read. Looking back on the book, I believe it was just what the author needed to keep the book moving along. If the book, does not piss you off at some point, then you will not have moments at the end where you look back and it clicks. One aspect was a tad bit outlandish, but I forgive! I felt I had to mention (vaguely. lol) some small things that may have bothered me so you would not take my adoring rant to mean the book has no faults whatsoever. Since I have mentioned them (again, vaguely) I can now move on to elaborate on what I loved. :D

Dez. Absolutely love this character. She is one of my favorite book heroines of all time. She is so Snarky, Sarcastic, Bad-ass, Hot, and just everything I love in a female lead. She is by no means perfect, however. But the girl has a good head on her shoulders. She is always looking to piss people off. It entertains her. I, for one, love this quality since that is how I roll with my family. Oh, they love it. ;)

Kale- I love this boy. There are just no words to describe how endearing this character is to me. He made me laugh. He made me smile. He made me blush. He made me sad. He is just such a sweetheart. He is flawed and he is so different from the male lead characters we see in so many books nowadays. It is refreshing and it has me completely infatuated with him. We would all be so lucky to find someone as genuine as this boy.

Brandt- Um. This kid is awesome. haha. That is all. I love the relationship he had with his cousin, Dez. It reminds me of the friendship I used to have with my sister. You know, you fight because you are family, but you are still best friends.

Let me circle back again to the romance....... <Jealousy> That is all.