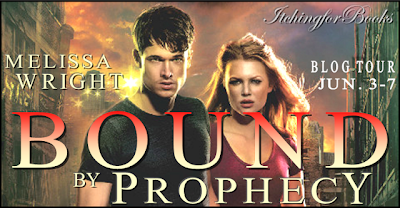 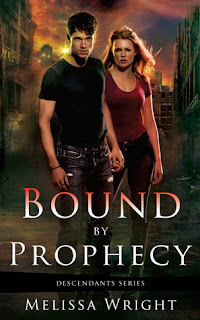 Twenty-two-year-old Aern is done watching his brother destroy the only thing that matters. He never wanted to take Morgan’s place among council, never wanted to rule their hidden world. But when the key to the prophecy is found, a young girl named Brianna whom Morgan will destroy, Aern knows he has to take action.
What he really wants, is for things to go back to normal. But now he’s kidnapped a girl, and his brother’s men are after him. His only hope is to join with the Division, but they have plans of their own, and it’s the last thing Aern is willing to do.
Emily just wants her sister back. She doesn't care about the prophecy, or realize what’s at stake. But when she goes after Aern, the truth of the matter uncoils, and Brianna isn't the only one who’s in danger.
Suddenly, they’re at the center of a secret war, and unless they can work together, they’ll both have a sacrifice too big to make.


Aern will do anything to stop his brother from fulfilling the prophecy, even kidnap a girl. She is not just any girl, though. She is the chosen one and Morgan will stop at nothing to get her. So Aern does the only thing he can do and he hides her, not knowing that she has a twin sister. Now he has to protect Emily and her sister from his psycho brother. And what he finds out while he is with Emily changes the whole game between him and his brother, prompting him to make the first move.

Emily just wants her sister back, doesn’t realize the danger she puts herself in trying to find her. She just knows that Brianna would not just leave her without telling her.  When she finds out things she thought were fairy tales are true, she finally begins to realize the danger. The prophecy she has know her whole life suddenly begins to make sense and she has to deal with the aftermath.

Who can you trust when both sides have their own secret agendas? No one is safe once the truth comes out.

I was a little hesitant to read this book because the MC is a guy, but the book sounded too interesting to pass up. I’m glad I went with it, because I really enjoyed this book. The only reason I’m giving it a 4 is that, it never describes what Aern looks like. If it does I don’t know how I missed it because I was waiting for it. So I just went with the guy on the cover and that’s what he looked like. :D The story itself was fast paced and could change at a moments notice. You think they’re safe and then BOOM knives are being thrown and blood is being shed. It was awesome and Emily is no little fruit cake. She can hold her own and doesn’t need a man to help her, which she demonstrates on occasion. I was wondering about the prophecy the whole time and what it actually says and we don’t really learn about it till the end. Well played Miss Wright, well played. LOL. It was KILLING me. I had my ideas, but I told myself to shut up. O.o With everything that happened in this one I don’t know where Miss Wright is going to take it with the sequel, but I can’t wait. I know it will be just as spectacular as this one.

Overall: This book is full of mind control, knife throwing and a prophecy that will keep you guessing even after the book ends.

Emily: She is one determined chick and will stop at nothing to get what she wants and she wants her sister back. And she will drop you on your head if you are not careful. :D She makes it no secret that she trusts no one and she just wants her sister safe. She also is not  one to hold her tongue; she’ll just spit out whatever comes to her mind. You don’t want to mess with this chick. I have a feeling in the next one we will be seeing more of her awesomeness.

Brianna- She is the complete opposite of her twin Emily. Brianna is more soft spoken and kind hearted. She is the sweetest thing and knows how to use it to her advantage. She is just as strong as her sister; she just doesn’t show it in the book. Her talents lie elsewhere.

Aern- He is no stranger to pain, but he can not bear to see Emily or Brianna hurt. That is why he must do everything in his power to make sure they are safe. He just didn’t expect how hard it would be. He follows no ones command and everyone knows it. He is a powerful man and a lot of people are counting on him.

About the Author
Melissa Wright is the author of the Frey Saga and the upcoming Descendants series. Melissa spends her time working on novels, but when not writing she can be found on goodreads and pinterest.