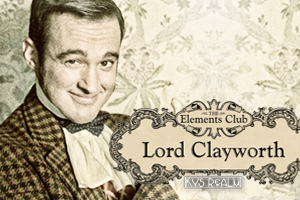 The brave and daring Ashley Snyder of Book-Marks the Spot recently traveled back in time to the late Victorian “Naughty Nineties” to interview hair dye developer, prankster and Elements Club member, Lord Clayworth.

AS: You are known throughout London for being a comedian / prankster. How did you become a member of The Elements Club, an investment group dedicated to scientific endeavours? It seems like a rather seriously minded group.

Lord Clayworth: (Leg bobbing up and down in a state of constant movement) It is my belief that every scientific group should have a comedian within, especially one as clever as I am. The founder of the club, Lord Gray, loves to pull a long face but he is quite the open-minded chap who is not adverse to a good laugh. He invited me to join The Elements Club after he read my illuminating and extraordinarily exciting dossier “Observations of Dyed Hair Strands Under the Microscope When Subjected to Adverse Temperatures and Various Pigmention Compounds”.  My detailed chemistry experiments into a greater range of hair dye colours and more permanent solutions, as well as my charming demeanor, won over the club members. I was voted in the year of our Lord, 1890. 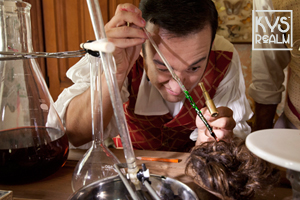 AS: I heard you cultivated a new pink hair dye. What are your plans to bring it to market? I would love to try it.

Lord Clayworth: You are more fashionable than most young females! Alas, I have not been able to secure any sales of that colour. I thought the French might be more inclined toward a vibrant new tone, but they proved to be as traditional in hair colour as the British. (Raises a pointed finger). Perhaps I should try marketing the product to pet owners. What do you think of dying pet poodles pink? It has a ring to it, don’t you agree? And girls could dress to match their dogs.

AS: A fascinating idea that seems ahead of its time.

Lord Clayworth: Yes, exactly! Insightful reporter that you are, you are correct. I am ahead of my time! It is a curse, I tell you! Just the other day, I mashed up peanuts into a delectable spread which I combined with strawberry jam on top of toast. Over the course of afternoon tea, I had Lord Gray and other members of The Elements Club try it, and they all hated it! They said peanut spread was too gooey and sticky and that no one would ever purchase such as item. Course, I think the idea as merit. Would you care to try some peanut spread with jam? 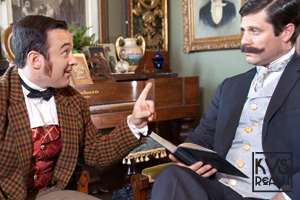 AS: Thank you, but I have tasted that mixture before. You’re right. It can be quite good. I think you should ignore the other members and sell peanut butter. You could use your shelled pocket friend, Peter the Peanut, as a mascot for the brand. Speaking of Peter, is he going on any new adventures?

Lord Clayworth: Peanut butter? Hmm... I had not thought of calling the spread “butter”. Might confuse people, don’t you think? As to Peter, yes, he is always exploring new places, people, and things. Last night at the theatre, he sailed through the air and hit Dan Leno on the nose. 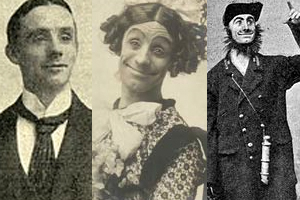 AS: Who is Dan Leno?

Lord Clayworth: My gracious, Miss Snyder! How could you not know the greatest theatrical comedian of our time?! The man is a genius! Mind you, not quite as genius as me, but still really up there in terms of comedic delivery. And his dame roles and working-class characters--hilarious! 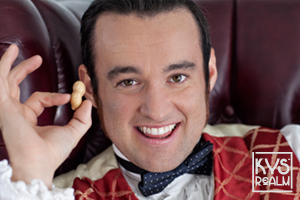 AS: If you admire Mr. Leno so much, why did you throw Peter the Peanut at him?

Lord Clayworth: Peter was inviting himself on stage since Mr. Leno never replied to my tremendously grand idea of having us both be featured in a music hall performance together.

Lord Clayworth: Well... somewhat... the opportunity presented itself to be on stage, and bold being that he is, Peter took it. (Reaches into his pocket and pulls out a shelled peanut). As of this moment, Peter is informing me that he is very, very lonely and would love to gaze into your gloriously beautiful eyes over the course of dinner. (Dramatically hands over Peter). Would you care to take Peter on an adventure? 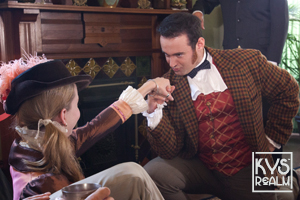 Lord Clayworth: (Grins knowingly). What is Peter without his golden-tongued minder, hm?

AS: I will have to see if my schedule allows for that. Tell me about your proposal to tax semen.

Lord Clayworth: (Sighs dramatically and looks down at stoic Peter the Peanut). The lady has denied us, Peter! (Looks up at AS with a cocked eyebrow). And yet, she asks about a rather indelicate subject. Perhaps all is not lost, hm?

AS: About the proposal?

Lord Clayworth: Yes, yes! I believe that I have the perfect answer to galvanizing our national economy out of the doldrums of this current crisis, however my fellow colleagues do not agree. In good faith, mixed with a strong dose of bold action, I am petitioning you as an independently minded female to add your vote of endorsement to my proposed concept of Taxing Semen. 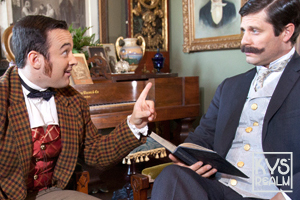 AS: That seems like a challenging concept to have Parliament sign off on. The logistics of measurement, collection, and use after collection seem far-fetched.

Lord Clayworth: Oh, there are so many ways I could answer that comment, but decorum as well as the hope of securing a dinner with you prevents me. Would you be interested in a tour of my chemistry lab? I might even have a love potion or two at ready...** 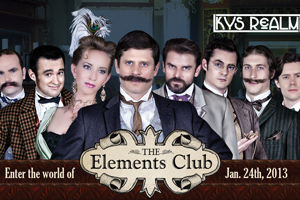 ABOUT THE ELEMENTS CLUB:
Introducing the Rat Pack of the Victorian “Naughty Nineties”
Set in Victorian London between 1892-1897, The Elements Club follows the lives of various members as they each unlock the power of love and fortune. 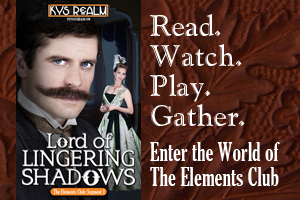 READ the first chapter of Lord of Lingering Shadows, the first segment of The Elements Club: http://www.kazapme.com/lord-of-lingering-shadows-chapter-1.html Now available on KINDLE 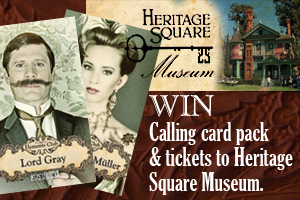 ABOUT KYS REALM:
KYS Realm, (pronounced “Kiss Realm”), is a transmedia storyteller who cultivates digital realms that captivate audiences though a mix of soul, passion, and adventure.

ABOUT ACTOR ALEXANDER J. ALEXANDER (Lord Clayworth):
Alexander J.  Alexander grew up on the south coast of England. His training includes a Drama and Film Studies degree from the University of London, as well as stints with Guildhall School of Music and Drama and the London Film Actor’s Workshop.  An improv enthusiast, Alexander is known for bringing a bolt of dynamic energy to the roles he undertakes; plus, he can never remember his lines. Alexander resides in Los Angeles.

Giveaway:
a Rafflecopter giveaway
Posted by Ryan Snyder at 4:00 AM