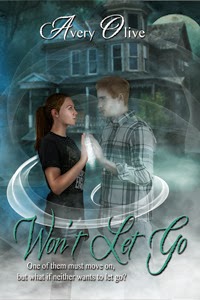 Seventeen-year-old Alexia Stone never wanted to move cross country. And she certainly never wanted to share her new bedroom with an amnesiac ghost boy desperate for her help.

But after setting aside the assumption she’s gone crazy, Alexia engages in the impossible—she agrees to help the ghost discover who he was and what happened to him. Convinced this mystery is what’s keeping the phantom in the world of the living, Alexia puts her heart on the line to find out what his unfinished business might be.

Ultimately, Alexia must decide what’s more important to her—keeping her phantom boyfriend or helping him finally find peace in death. What she didn’t plan on was not having a choice. One of them must move on, but what if neither wants to let go?


What happens when you find the one that makes you happy and know you can never be with them?

Ok so I just finished Won’t Let Go and I’m crying my eyes out. The endings of books are always the worst/best. And I swear there is going to be another one…..or am I the only one that got that vibe, if so I’m going to cry some more. Anyways now onto the actual story.

When I first started reading the book it was a little slow, but that was because Alexia and her family just arrived at their new place. I was intrigued how Mrs. Olive was going to do the whole ghost thing and I wasn’t disappointed. I haven’t read a lot of ghost stories, but I really enjoyed this one. It was part mystery and romance…. Well I love a good mystery and this one had it. What really happened to Embry? Who knows something their not telling? Gosh I love trying to figure these things out. To bad I’m not a very good detective lol I thought I knew who did it, but I was wrong until the end. I had some points where Alexia grated on my nerves but I’ll talk about her in a bit. The story was believable and something like that could happen….ok maybe not a real life ghost (but I swear I saw my grandmother’s mom once. Freaked me out). Now the romance it was sweet but happened to fast. They’ve only known each other …what a week or 2 and they instantly love each other…no love isn’t said, but I think it’s implied. I still thought their interactions were cute though, they did make a nice pair. It would have been better also if he had his memories…or maybe it wouldn’t, you’d have to read the book. I’m still holding out hope that there is going be another one. I mean what happens to Alexia? And Allison? And just everyone, only time will tell. *sigh*

Overall: A light and fun ghost story filled with lies, deceit, and romance.

Alexia: I didn’t warm up to her right away. She was just waaaay to judgmental for my taste. She toned it down after a while though. I really commend her for helping Embry our, not many people would do that. They’d probably just call ghost busters…anybody…no, ok then. Lol By the end of the story I felt her pain. I just wanted to hug her.

Embry: I don’t really know what to say about him. Do I talk about his ghost self or real self? I’ll talk about his ghost, or spirit how he puts it. He was an angry mess when we first met him. That could have been because of Alexia moving in his room. Ok that is why. He has amnesia and can’t remember anything. He is a really sweet guy and I smile every time he said something sweet or gave Alexia a look. I wanted what was best for him, but I also wanted him to be with Alexia. UGH life is so complicated sometimes lol 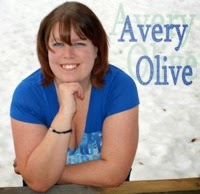 Avery Olive is Canadian. She is married and has one child. When she’s not helping raise her very energetic and inquisitive son, she can be found working on her latest novel--where she devilishly adds U’s into every word she can.
When she is looking for a break Avery enjoys cake decorating, losing herself in a good book, or heading out to the lake to go camping.
The release of Avery’s first novel proves to her it won’t be the last. As long as her family continues to be supportive, she can find the time, and people want to read, Avery vows to keep on writing.