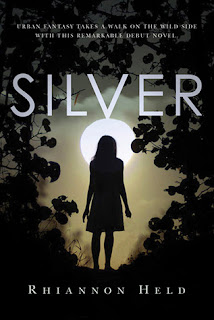 
Andrew Dare is a werewolf. He’s the enforcer for the Roanoke pack, and responsible for capturing or killing any Were intruders in Roanoke’s territory. But the lone Were he’s tracking doesn’t smell or act like anyone he’s ever encountered. And when he catches her, it doesn’t get any better. She’s beautiful, she’s crazy, and someone has tortured her by injecting silver into her veins. She says her name is Silver, and that she’s lost her wild self and can’t shift any more.

The packs in North America have a live-and-let-live attitude, and try not to overlap with each other. But Silver represents a terrible threat to every Were on the continent.

Andrew and Silver will join forces to track down this menace while discovering their own power and their passion for each other.

Alternating POVs, bitches. My FAVORITE. I can get into both the main character's minds and I love it. Love. It. MUAHAHAHA! Moving on.

This book has a very original premise with great characters who I grew to love. Okay, I am done gushing. I will now look at the book from an objective angle. *whispers* loved it. :P

Alright. The book starts off when Dare is tracking a lone wolf that smells of silver in one of the north american territories. He thinks the wolf is from Spain, because any wolf that smelled of silver is probably carrying it on their person (.. or... wolf?) and intending to harm another with it. What he finds, however, is a female werewolf who has gone crazy from someone INJECTING SILVER INTO HER BLOODSTREAM. WHAT THE HELL? Who does that to a person. Dare feels horrible for the poor crazy chick who thinks she can talk to death and the moon. So he tries to find her somewhere to stay and vows to find and kill whoever did that to her. Right after he dumps her off on someone else. lol. I love how he is no prince and does not claim to be. He is a good man and lives to protect others, but he lives alone and is hated and feared by the pack wolves. He is troubled and dark, but he cannot help but feel drawn to protect the bedraggled crazy she- wolf when she refuses to stay in one place without him. So he takes her with him. GAH. I love these two. I love being in both of their minds, because neither one of them likes the other very well at first and we get to see their feelings for each other actually change and grow over their time spent together.

This book made me cry- which I hate, but simultaneously love. I mean, some horrible things happen in this book to make Silver the way she is and her story is heartbreaking. I love it, though. It may be a story of tragedy, but something beautiful comes out of it. The ending is bittersweet and I was just staring at the pages, heartbroken because the story was over.

The villian: Omagosh, you guys. This guy is a hardcore monster. I did not like him at all in relation to what he did to my characters, but to make the story what it is, he was perfect. The sick b*st*rd. O.O

The only reason, this book is not a solid 5 is because of the pass-over sex scene. What? Are you kidding me? lol. Nothing? I get nothing?

The cover is gorgeous, the characters are awesome, and the story is equal parts heartbreaking, gruesome, and sweet. I loved it- seriously. If you love werewolves, humor, sweet romance, and troubled yet awesome characters, then get on this train. Although I must warn you.. Silver is not your ordinary everyday cookie cutter character. She is damaged, but I freaking love her anyway.. or maybe... I love her because she is damaged. I have no idea.

I. Freaking. Love. Death. He. Is. Freaking. Awesome. Enough said. MEEP!
His and Silver's interactions were priceless.

4.7 because my sex scene had no details. lol.