Much thanks to Grapevine Book Tours for allowing me to be a part of this tour. Once I seen Strength and Courage I knew I had to be a part of the tour. These books were Awesome!!!! You can find my reivews as well as the giveaway below. Also from Oct. 15th-Oct. 18th Strength will be FREE!!!!!!!!! 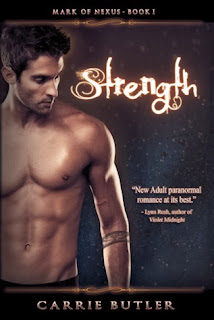 When college student Rena Collins finds herself nose-to-chest with the campus outcast, her rumor-laced notions are shattered. Handsome, considerate, and seemingly sane, Wallace Blake doesn’t look like he spends his nights alone, screaming and banging on the walls of his dorm room. Hell, he doesn’t look like he spends his nights alone, period.
Too curious for her own good, Rena vows to uncover the truth behind Wallace’s madman reputation--and how two seconds of contact had left her with bruises. Of course, there are a few setbacks along the way: guilt, admiration, feelings of the warm and fuzzy variety…
Not to mention the unwanted attention of Wallace's powerful, supernaturally-gifted family.
They’re a bloodline divided by opposing ideals, two soon-to-be warring factions that live in secret among us. When Rena ends up caught in their crossfire, Wallace has no choice but to save her by using his powers. Now they’re really in trouble. With war on the horizon and Rena’s life in the balance, he needs to put some distance between them. But Rena won’t let go. If fighting is what it takes to prove her own strength and keep Wallace in her life, then that’s what she’ll do--even if it means risking a whole lot more than her heart.

I seriously did not want this book to end. I don’t know how all this awesome fit in one book, it is bursting from the seams. Lol  So what to say about Strength. It has the clueless heroine which is Rena and the misunderstood bad boy…or madman as the whole campus calls him. They accidentally run into each other and both of there worlds are instantly changed. Wallace isn’t what they all thought and Rena can’t get her mind off of him. Rena knows that he is hiding something but she won’t outright ask him. Well she does but he sorta gives her the truth. When she does find out the truth she is shocked but not entirely overwhelmed. We are introduced to a whole new race, the Dynari who have an assortment of different abilities.

I also love a new race and all the abilities that they posses. This book was beyond amazing and you need to take advantage of the sale. I know everyone is going to love this book. Oh and the sexual tension is off the charts but they can't act on it. DANG that has to suck BIGTIME! I don't know how Rena stood it. I would have scaled him. lol There is a reason for that..and it's a big one. I can't imagine living with that. The isolation, the depression, it's all too much. Wallace is strong in more ways than one.

Even someone with uncontrollable Strength needs someone to lean on.

Rena: She was very head strong. Although she did let others influence her thoughts. Wallace for example, she hears he is a psycho so he must be a psycho. I’m glad she finally started to realize she was wrong to judge people before she even meets them. She really grew up during this book; hopefully she will be able to stay that way.

Wallace: Everyone thinks he is a madman. Is he a madman or is there something else going on…..read the book to find out :D (gotta love me right lol). He is a complete mystery from the start. You hear all these rumors about him and after Rena starts to believe them. Why do people do this? Get to know the person before you judge. I forgave her though because she apologized. :D Wallace he a great guy. I guess some could look at him as a bad boy but I didnt get that vibe AT ALL. He is super intelligent and sweet. Like I said earlier I WOULD SCALE THAT. mmmhmm Ok so off that note, I keep getting distracted by his sexiness which is on the cover by the way. YUM anyways he is a tortured soul that just wants someone to lean on and tel his secrets to, is Rena that person? Only time will tell.


Overall: This book is by far one of my favorites of 2013! Very original book that kept me so thoroughly interested that I finished it one sitting. A must read for 2013!!!!!! 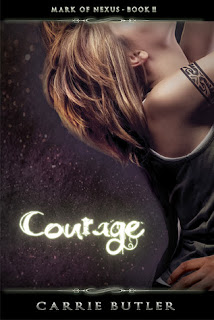 Making a deal with the bad guys wasn’t the highlight of Rena Collins’ semester, but, hey, it saved her boyfriend. Now, in order to appease the human-altering organization known as ERA, she’ll crawl under their microscope while they study the Mark of Nexus and plot their eye-glazed version of the future—until she realizes that’s not all they’re plotting.
Wallace Blake has always known his girlfriend is unlike most girls. But now that information has surfaced regarding the two bloodlines that balance his supernatural race, he finally understands why. Rena belongs to one of them. She’s been augmenting his power, all along...
Enter: Corynn Catley. Brought into the country under the guise of an internship, she’s intended to become ERA’s secret weapon. Kind of. Her abilities cancel out Wallace’s, rendering him powerless, but that’s exactly what he’s always wanted. Too bad it only works when his girlfriend’s not around.
All the while, Rena fails to notice the crush her geeky best friend, Aiden Ross, is nursing. He’d give anything for her to see him in a new light—even reinvent himself through questionable means--but there’s a reason people are told to be careful what they wish for. Finding the courage to tell her could put everyone’s lives in danger.
***
Courage (Mark of Nexus #2) is a New Adult paranormal romance that features four unique points-of-view. While the novel stands alone, it is best enjoyed after Strength (Mark of Nexus #1).


So I’m going to start this review with saying what an idiot I am. I started reading Courage and didn’t look at where I was reading. I read the last 4 chapters before I even noticed. I was like really. I knew I felt like I was missing something but I was like maybe there will be a flashback. Yeah no. Even though I read the ending it didn’t stop me from loving this book. I just pushed those last chapters out of my mind. Courage was just as awesome as Strength and I love how this author writes. I’m pretty sure this book was longer than Strength but I finished it faster. I stayed up till 2 a.m but that just goes to show how hooked I was.

Sometimes all it takes is a little Courage to make it through.

Things in Courage by no means slow down. There is danger everywhere and then there is Rena’s and Wallace relationship. They are so perfect for each other but it is difficult for them to be together because Wallace could hurt her. But good things never come easy. The strain on there relationship in this one had me torn apart. I may have cried a little. Rena has such a huge heart. so in the book there is this new girl and apparently she neutralizes the Dynari powers so Wallace can actually huge her and touch her without her getting hurt. Rena sees this and it tears me up that she had to watch. She knows she will never be able to be that free with Wallace. So she does the only thing she knows how……which is……I can’t say. *sniff*

Now we learn a lot about the mark of Nexus in this one and man it was some good stuff. I held my breath the entire time the found out something about it. Oh gosh I wish I could tell you about the things I learned but I just can’t. You can’t believe how much I want to. I want to talk to someone about it! It’s killing me and now I have to wait until 2014 to read Loyalty and AHHH the frustration. I know its going to be even better than Strength and Courage because that’s how awesome Carrie Butler is. She does not disappoint.

The cover: Love love love the cover, just like the first one. Especially the tattoos. I can not wait to see the next one. MEEP

Overall: Another fantastic book by Carrie Butler that will leave you begging for more! 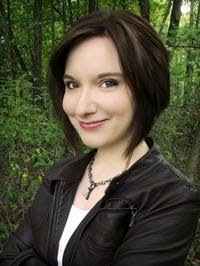 Carrie Butler daydreamed her way through college—until they thrust a marketing degree into her hands, slapped a summa cum laude seal on the corner, and booted her out into a less-than-stellar job market. Instead of panicking at the prospect of unemployment, she used her Midwestern logic to steer into the skid and point her life in the direction she really wanted to go: writing out those daydreams.
Her passion for New Adult fiction led her to co-found NA Alley—a widely recognized informational hub for the category. She is the author of STRENGTH (Mark of Nexus #1) and COURAGE (Mark of Nexus #2).
Website | Blog | Facebook | Twitter | Google+ | Pinterest | YouTube | Goodreads


Prizes:
One (1) signed paperback of Courage by Carrie Butler {US only}
Five (5) eBook copies of Courage {INT}
One (1) limited edition Mark of Nexus pillowcase {US only} 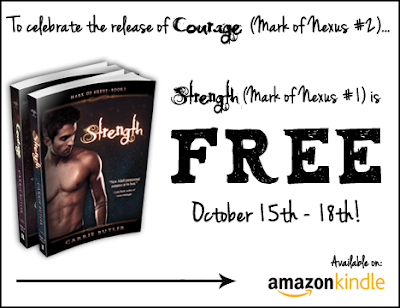