Much thanks to Grapevine Book Tours for allowing me to be a part of this tour. :D To follow the rest of the tour, click on the banner above. 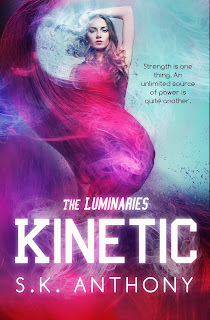 Series: The Luminaries #1
Publication: September 20th, 2013
Category: New Adult (NA)
Genre: Urban Fantasy (UF)
Synopsis:
Being strong is one thing. Being an unlimited source of power is quite another.
Genetically altered by the Organization, Annie Fox takes down criminals CIA-style with her luminary strength. With nothing to mend but her broken heart, she is relentlessly pursued by her boss Derek Lake. Just when Annie is about to give him a chance, her ex-husband unexpectedly comes out of hiding.
A wanted man, Nick Logan is a cold-hearted murderer who is considered enemy number one, and orders are clear: kill on contact. He is more powerful than ever and threatens the lives of those she holds most dear. His plan? Get his hands on Annie and use her Kinetic energy to destroy them all. When Annie finds herself with an opportunity to end him, she pauses, horrified by the scars covering the face she once loved. A split second that will cost her everything …

** Kinetic is a stand-alone novel. All books in series are part of the same world with the characters intertwined. **


Annie is a Luminary, which means she has power. Hers happens to be strength and later she will find out she has another power. I’m a big fan if X- Men and all things related with supernatural powers. So of course I loved this book. All their powers were different and I loved learning about each one. So we have Annie and her friends who work for the Organization or the Org as they like to call it and they are trying to stop a serial killer. The only is that it’s Annie’s Ex- husband Nick Logan. Talk about a bummer. He leaves her to become evil. Not something a girl wants to think about. Anyways they are trying to find him before he finds them, or just Annie because of her unique power. But some things aren’t what they seem. Something is fishy. I could tell about not quite halfway through that there was something going on behind the scenes. And then they find out the truth and it was….sick. Gosh how do I say this without spoiling the book? Let’s just say that friends will become enemies and enemies will become friends. How twisted Is that I love it! :D Oh and the moments between Annie and a certain someone *swoon* someone call the fire department. This was a fantastic start to what I know will be a great series; I can’t wait to see who the second book will be about, maybe Kevin. I really liked him. :D OH MY GOSH I almost forgot about the ending. Ugh that ending I thought it was going to go one way and I am here crying like a baby and then BAM nope not what I thought. I was like S.K. Anthony- 1 Tiffany- 0 LOL But I did my little happy dance and all was right with the world. :D

Annie was nice and easygoing. You couldn’t help but to like her. She is super strong but a total softy. Gosh I loved her. She has such a dilemma to deal with in the book. She is broken because Nick left her. She didn’t feel love until him and he ripped her heart out. I’ll talk about Nick in a minute.

Derek is a little pushy and possessive but we find out why later in the book. I think he was a swell guy but I knew he wasn’t what Annie needed. Annie likes to break the rules and he likes to follow them, Yeah not a good combo. Other than that he is a pretty stand up guy.

Nick left Annie and didn’t leave a note as to why. Oh and there’s something about him killing people. Does it make me weird that I still love him? He is goofy and sinfully sexy. I don’t care about the scars and his eye patch. It’s easy to see why Annie fell for him. Man the things we learn about him in this book. The suspense killed me!!!!

Beth: I have to mention Beth because she was the bestest friend ever. She has been there for Annie since they were 15 and stood up for her. I have much respect for her. Maybe we can get a story about her and how she met Andrew. :D Just a suggestion.

Kevin: He doesn’t come in until later in the book, but I have a little crush on him. I want to read a book about him, but then he would be taken. L He is goofy just like Nick and has a perverted mind. LOL but he is 17….and a guy. I just loved him. :D

Overall: An interesting read full of mystery and deceit!

S.K. Anthony is a writer, a reader and a make-stuff-up-er who lives in New York with her husband and toddler twins. She is a wine connoisseur, which just really means she knows she loves it, and a caffeine addict. When she isn’t busy with her family she finds herself being transported into the world of imagination. Well, either that or running away from spiders…she is convinced they are out to get her!