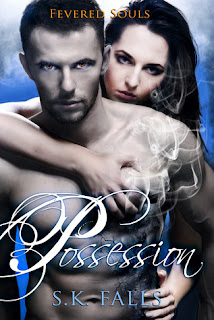 Synopsis:
After I left for college, I thought I’d never see Eden again. But I found myself headed back four years later, destitute and unable to find a job anywhere else. Still, I was adamant nothing would keep me there for long.

Then I met the intoxicating Dax Allard. Copper-colored eyes, skin that emanated an exceptional heat, and a strange “dog” at his side… I was drunk on him.

But Dax’s past was darker than mine, teeming with ancient secrets. Falling for him could cost me my life.

I had two choices: walk away or deal with the perilous consequences.

It was no choice at all.


Excerpt from Possession (Fevered Souls #1), by S.K. Falls:
Blood rushed to my face at his tone. “What…” I swallowed. There was no way I’d ask this if I wasn’t hopped up on whatever they’d given me, but I wanted to know. “Have I offended you in some way?”
For a moment, Dax stared at me, confusion coloring every facial feature. When understanding seeped in, his eyes widened. Seemingly unconsciously, he took a step closer to me. In spite of the giant fireplace roaring just a few feet away, I could feel his body heat waft out toward me. He was like a walking furnace. “You think…you’ve offended me?” He actually sounded astounded.
I stared up into his copper gaze, the effects of the drugs somehow melting away. I was completely hypnotized. There was no way I could’ve lied to him, not even if my life had depended on it right then. Nothing else existed in that moment but the two of us—Oscar, the room, even what had just happened to me in the forest fell away.
In a quiet voice, I said, “You act like I’m the most abhorrent person you’ve ever met. You refuse to come near me. And you don’t want me working for you. Why else would that be?” Ridiculously, I felt a lump in my throat, simply by speaking of his rejection.
A muscle tensed in Dax’s jaw, as if he was physically biting back what he wanted to say. His fists tensed into balls, thick veins standing up on his arms. “Ms. Beaumont,” he finally said. His quiet voice held a hint of a tremor. “Believe me when I tell you I am not in the least… offended by you.” He took a deep breath. “It pains me that you think so.”
“Then…then what is it?” I asked, still gazing into his eyes.
But he shook his head.
“Another secret,” I muttered. “You seem to have so many.”
He smirked, his gorgeous face transforming into something hard and bitter as he looked away, toward the windows and the woods outside. “Yes. And none of them are good. It’d be in your best interests to stay away.”
The fire crackled. I realized that sometime during our conversation, Oscar had slipped away. I looked down at my hands, fisted in the blanket. “What if…what if I don’t want to stay away?”
I couldn’t believe I was saying the words out loud. I had just met this man. But somehow I knew that he felt exactly the way I felt. I was beginning to suspect it was the reason he was so…strange around me. There was something between us that eschewed the traditional hesitant, “play it cool” attitude normal guys and girls our age displayed before they got to know each other.
I expected him to become furious or stalk away. It surprised me when he sighed deeply instead. “Then we’re in trouble,” he said, his voice barely a rumble. “Because I don’t want you to stay away either.” 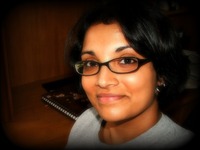 A huge fan of spooky stuff and shoes, S.K. Falls enjoys alternately hitting up the outlet malls and historic graveyards in Charleston, SC where she lives and imbibes coffee. Her husband and two small children seem not to mind when she hastily scribbles novel lines on stray limbs in the absence of notepads.
Since no writer’s biography is complete without mention of her menagerie of animals, you should know she has one dog that doubles as a footstool, a second that functions as a vacuum cleaner, and a cat that ensures she never forgets that her hands are, first and foremost, for pouring cat food.

Giveaway!!
Leave a random comment telling me what you think of the excerpt or description. Does this sound like your kind of book?? [: Winner will be selected May 9th.