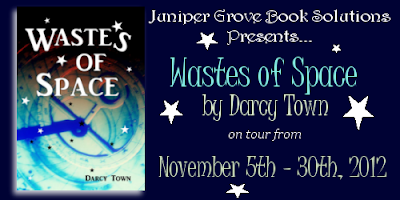 Click on the Banner to see the full tour 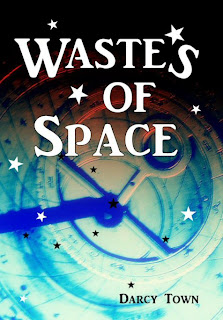 Title: Wastes of Space
Author: Darcy Town
Published: Self-Published - December 14th, 2011
Genre: Science Fiction
Word Count: 142,000
Content Warning: Mature - language, sex, graphic violence, drug use/abuse, prostitution
Synopsis:
In the early 21st century, the Cold War between the American and Chinese Empires slogs on in a stalemate. There's a ceasefire in effect, but the peace is artificial—secretly enforced by an alien blockade that surrounds the planet. Earth is caught in a territory struggle between two warring factions: the Empire and the Resistance. Lacking harvestable talents, both groups classify Earthlings as Wasters.

Hidden among the Wasters is an alien girl with the power of moving spaceships. She teams up with Rake, a drug-addicted ex-Astronaut, to join an intergalactic war that Earth did not know existed…but first Rake has to realize he's travelling with an alien to begin with.
Amazon | Barnes & Noble | GoodReads

My Review
This book was sooooo not what I was expecting. I didn’t thing that I would like it very much, but it proved me wrong. All the characters were highly developed which I highly enjoyed and they were unique in their own way. I also liked how it switched between Rake, Ravil, and the hunters. It kept you in the know and you knew what was going on. There were a lot of moments where I was like what in the world just happened. I never knew what was going to happen next. There were a few of the what in the world moments that I didn’t like. I know it added the story but really fishnet stocking and a skirt (You have to read the story to find out). It’s not that I didn’t enjoy it, I did. It was just really random and unexpected and I liked most of them. Also let me tell you that the author held nothing back. She was not afraid to tell it like it is. Usually books keep you in the dark or are full of wishful thinking or a perfect little world. Not in this book. The author tells the cold hard truth, which I very much enjoyed. No one is perfect but we all have a conscience. Rake was a prime example. He is a druggie that couldn’t handle his past and drugs were an outlet for him, but he knew right from wrong. I’ll talk about him more later.  This book just kept me my toes. It also kept me up until 5 in the morning. LOL I couldn’t put it down. I was addicted like rake with his drugs. This book totally BLEW MY MIND and it is going in the top 10 books of 2012.
Ravil she was a likable character. In the beginning she was a real winy baby. Well most of the story she was. She always had to have someone save her. At the end she finally started to stand up for herself and get a backbone. I can’t wait to see where she goes.
Rake he was a real piece of work. He was beyond words. He was I guess you could call it a male hooker. He had sex for money so that he could buy his drugs. I didn’t think I would ever like him, but I ended up doing it. He decided to change his tune and IDK if that is a good thing. (See reference to skirt). Although he had his faults he was a really good guy. I really started to like hi at the end of the book. I’m going to be waitin for him to come to his senses.


A howl from outside the building woke Ravil up.  Her eyes shot open as goose bumps raced across her skin.  She reached for Rake, but her hands slipped through air.  Another howl came louder than the last, followed by a faint scream.  She stared at her empty outstretched hand as the realization set in—he’d abandoned her.
Ravil slipped out of the tub, kept low to the floor, and held her knife out in front of her.  She reached the hall and crawled towards the windows.  Weak sunlight filtered into the apartment through the grimy glass.  Every fiber of her being told her to go back and hide in the darkness of the bathroom, but she would not wait for death to come to her.  Rake had left her; he’d lied last night.  She held back tears and moved another few inches.  She was on her own now and she would handle it.
The hall creaked.  Ravil froze.
Rake kneeled by her side and whispered into her ear, “Not a sound now, Bebette.”  He held one of her Bowie knives and crawled past her, keeping his head below the level of the windows.  He crept towards the closest and used a piece of mirror to look outside.  His shift in expression made Ravil scoot back into the bathroom.  She climbed into the tub and covered her ears.
The howls and screams continued until they cut off in a definitive silence.  Rake came in some minutes later, his face ashen.  He sat down and looked over at her.  “We cannot walk out on the streets.”
“Wh…why?”
“We just can’t.”  Rake’s hands shook.  He grabbed his left hand with his right and pressed it into the floor; he broke into a sweat.  He took a deep breath.  “It’s not safe.”
“Can’t we run?”
He shook his head.  “Do you want to end up a screamer?”
Ravil sank down below the level of the porcelain.  “What is out there?”
“The low, the hungry, and the desperate.”  Rake looked nauseous.  “You don’t go to the Dead, never, even if you will get killed otherwise.  Everyone knows that.”
She looked towards the doorway.  “How did those others get out there then, the ones screaming?”
He closed his eyes.  “Sometimes the sick and drunk end up here by accident, stumbling in the night.  Others get here through punishment, piss off the wrong person and you’re dropped in the Dead, left bound, sometimes not, sometimes they have a chance to run.”  Rake looked ready to throw up.
She stared at her hands.  She touched the air with her fingers, caressed it.  She searched for the feeling she had the night previous, tried to recall it, but it was like pulling on smoke.  She frowned and stared at her hands.  Why was she trying to run, what was the point in trying to escape quickly?  Rake stayed with her now out of a misplaced sense of guilt.  The quicker they got out of here, the sooner he would leave her.  Then she would be alone and most likely she would be just as dead.  Ravil shoved her hands into her lap.  “What do we do?”
Rake sighed.  “Something stupid and dangerous.”  He bumped his head against the countertop.  “Damn it.”
Ravil watched him twitch.  “You’re ill.”
“I am not ill.”  He rubbed his palms together.  “Get up, we’re heading downstairs.”
“Why?”
“Because I say so.”  Rake hauled her out of the bathtub.  He looked her over and set her on the bathroom counter.  He pulled out his knife.  Ravil scooted away.  Rake pinned her leg in place.  Her grabbed her pants and sliced off the material below the knee.  He did the same for the other leg.  He stepped back at stared at his handiwork.  “There, no more tripping.”
She didn’t answer.  Rake looked up and noticed her trembling.  “What is wrong with you now?”
“I thought you were going to hurt me.”
He backed up.  “I am not that way.  Not with kids, not with girls.”
“I—”
“Come on.”  He stepped out of the bathroom and listened.  He pulled a gun from his belt and handed it to her.  “I know you can use this, you don’t need to tell me why.”
Ravil checked how many shots she had.  “It’s because—”
“Ravil, I don’t want to know, that’s what I mean by you don’t need to tell me, okay?”  He searched her eyes.  “Keep your story to yourself.  I’ll keep mine to myself and we’ll both be quiet.  Okay?”
She dropped her eyes.  “Okay.” 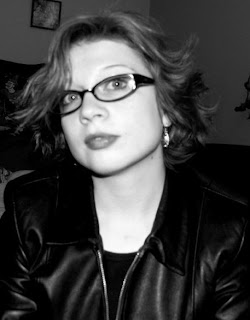 I write what I enjoy reading/watching - which is fantasy/sci-fi with dark humor and a bit of romance. What I consider romance however is to some...a bit off (and kinked out). And when I say dark humor I mean black. But I always have lighthearted moments (I do not believe a story should be all one way or another). Gotta spice things up!

Speaking of...I like to write stories that cater to all sexual preferences in one story (as opposed to just writing gay/lesbian lit, etc). I have your typical male-female romances. I have male-male, female-female, transgender, bi-sexual, sub-dom, etc. This is mostly due to the fact that well...1. I like writing about it. 2. I see it in my everyday life. 3. I like having a well-rounded cast of characters from all walks of life.

I am the author of the Morningstar Trilogy and the Wastes Series.
Amazon Author Page | Facebook | Twitter | GoodReads | Blog